The Ocean to Sound Relay travels from the south shore of Long Island starting at Jones Beach and winding to the north shore in Oyster Bay. This may have been the most fun I’ve ever had running a road race! While running traditional races with friends is fun, we were able to spend the whole day together and cheer each other on! I have some amazing runner friends – you’d never know that half these ladies just met on race morning 💜 My team was able to spend the whole day together in and out of the car, cheering on our runners and blasting music from my Jeep.

1. Runners can only run 1 leg for their team (but they can run a different leg for another team, too)

2. Runners must know their route! The course is open to cars and *most* of the turns are marked (more on this later 😂).

3. Your team must transport each runner to the transition points. You must also provide support for your team aka plenty of water and snacks 💦

4. You may substitute a runner if needed as long as they are added to the team roster before their leg starts.

Once I had a team of badass ladies assembled to conquer this relay, we needed a game plan. I assigned legs to each runner and used their estimated paces to figure out transition times and our total time. Packet pickup was quick and seamless at Runner’s Edge in Farmingdale. Each runner needs their bib and our support vehicle needed directions on where to go! Unfortunately, with 3 days before the race, Pam took a tumble while running and was unable to run [she’s doing okay though 💜] Thankfully Rule #4 allows us to substitute a runner and Kat joined the team! I packed the car with a case of water, bagels, pretzels, bananas, granola bars, and beers for as we each finished 🏃🏼‍♀️🏃🏽‍♀️

With two start times, 7am or 8am, there are runners cruising all day long. My team, Fast Friends ⚡️, opted for the earlier start based on our projected finish so we met bright and early at Jones Beach for the start. The gun went off right at 7 and Kim M. kicked off the race. We hopped in the car to follow along the race route with water, music, and plenty of high fives 🙌🏻

While I could recap the whole race … I didn’t run the whole thing. I had 7 amazingly supportive and incredibly strong friends who conquered 50 miles together! 🙌🏻 I asked each of them to share their experience and what to expect for each leg of the relay.

Leg 1: The one that starts along the ocean.

Leg 1 has a really comfortable start – not hectic or stressful and it started right on time. The sunrise was at its peak over Jones Beach and the air was perfect. Once you get off of the beach boardwalk and onto the road, you see all of the support vehicles and have great crowd encouragement. I was lucky to see my team twice for some high fives. Heading north on the Wantagh Parkway, you run straight to the park where your teammates are waiting at the transition. Leg one is flat with great views! – Kim M.

Leg 2: The one with all the traffic lights.

Take a quick loop through Cedar Creek before you head out along Merrick Rd towards Massapequa. The teams are still pretty close together here so we made friends along the way! Watch your step all along the sidewalk as it is an uneven death trap! Crossing Merrick Rd & Sunrise Hwy, there were cops directing traffic but be careful to only cross when it’s safe. You make a left and head straight to the transition in the Massapequa preserve. This leg was fast and flat which allowed me pick up the pace! -Louise

Start of Leg 2- Kim did her marathon training run all along the course with new friends every 6 miles!

Leg 3: The one where you know you’re not on the south shore anymore.

After watching 2 of my other fabulous teammates complete their legs, I was ready to do my part. It began in the flat shaded preserves but then went out into the streets where I knew I wasn’t on the south shore anymore. There was a slow incline that lasted for about a mile and half but was so lucky to have my beast of a teammate who turned her leg into a marathon training run (Go Kim M!🎉). I was completely grateful. Such an amazing day with an amazing group of ladies. – Kim S.

Running along the Bethpage golf course… hills are starting!

Leg 4: The one where the support vehicle gets lost.

After some changes to the course this year, leg 4 comes in just about 6 miles. [The support vehicles can generally follow the runners – but make sure you have the printed directions in case!] Starting flat until mile 3 where it takes you on a never ending incline until mile 4 where it flattened out again and you hope the last 1.8 will be easy peasy… approaching mile 5 begins a pretty steep incline (short lived) where you then have a decline that is seriously steep and hard to control your downhill speed on; (careful of that runner’s knee and IT band sensitivity here!) Then you turn the the corner and you’re done! The energy you feel being on a team and amount of support vehicles driving by with honks and water cups is truly awesome. The leg itself would have been lonely though without our girl Kim doing her long training run beside me! Put it on the calendar for next year! -Chelsea

Leg 5: The one where the runner gets lost 😂

There were two brutal hills in my leg and the weather was great. However, I ended up running 8 miles instead of 6 because I got lost [back to the rules of this race… the turns were not all marked and several runners got lost during this leg] 😅 other than that little mix up (sorry team!) it was such a fun day. I got the opportunity to bond with women I never met before trekking across our beautiful home, Long Island 🌴 -Melanie

Leg 6: The one where the road only goes uphill.

The first 2 miles I was going at a great pace for me, averaging about 9:50/mile. Then the hills started. They slowed me down quite a bit and I had to do some walking but, I did it! The girls were the best cheering squad. Some I had never met before and am so glad that I did! The day flew by, it was so much fun and so different from any race I had ever run- no mud, no obstacles, just running and the street. I can’t wait for next year! -Tree 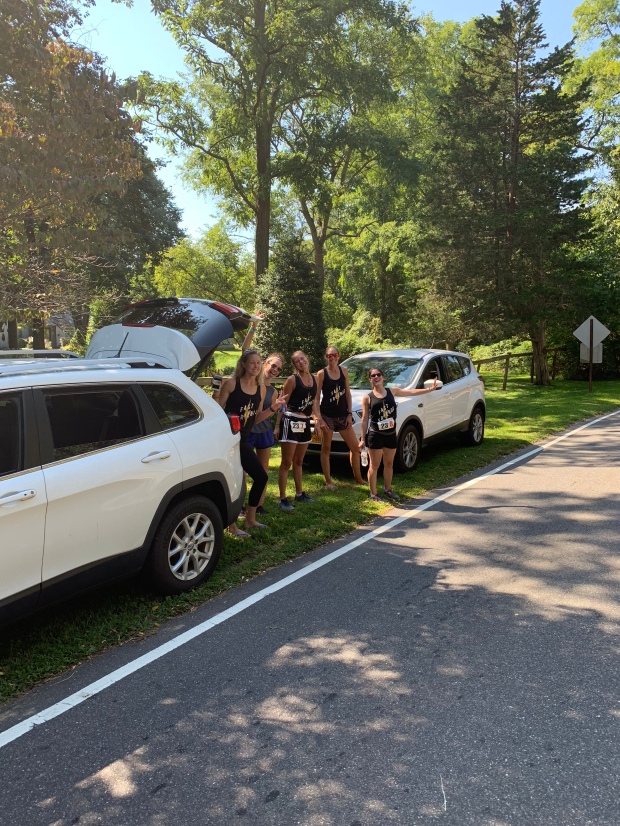 Support vehicles cheering on our team and other runners!

Leg 7: The one with a reputation for being the toughest.

“I think I blacked out during my leg” … 😂 I started the 7th leg of the race around 1:00 PM, and it was pretty freakin hot out by then. Prior to my leg, I heard rumors of the difficulty the 7th leg provided due to the length and HILLS. Let me say, the leg lived up to its hype. The hills were brutal, but after the second mile, I made it through the worst and ran the rest along 25A in the shade. I was so happy to have the opportunity to challenge myself with my teammates cheering me on! (The beer and food at the end helped too!) -Mary Alice 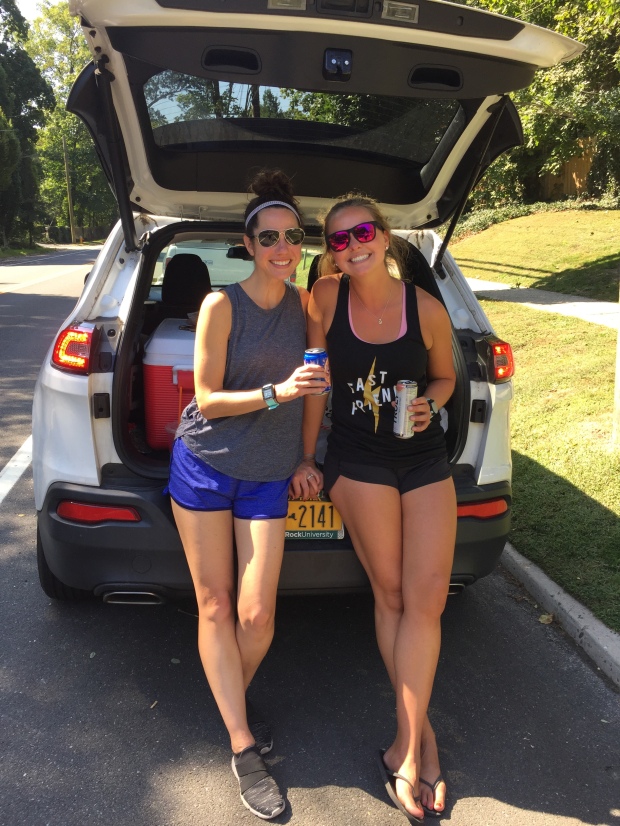 Leg 8: The one where we cross the finish line!

Finishing up the last leg of the day was definitely a fun experience! You have been up since sunrise with your team, in and out of cars all day cheering on fellow runners and now running during the peak heat of the day. It was a hot, sweaty and for the most part a downhill/flat course to the finish. A big shoutout to my teammates for stopping to give me water on the course. The best part was knowing there was real food & beer in sight once you crossed the finish line and that we conquered 50 MILES together! -Kat

Fast Friends had a blast running this relay! Once you cross the finish line, your team can head to the party at the end with unlimited drinks and food! There was music and awards being given out as well. The Spirit Stick is given to the team who beat exemplified the spirit of the relay. There were some great themes from Hawaiian shirts to Bob Marley and cows to Woodstock. If anything we learned that we’re going to need to step up our game if we want to win the Spirit Stick next year!

Have you ever done Ocean to Sound?? Share your experience in the comments below!

We are two exercise professionals living on Long Island hoping to share our love and knowledge for all things fitness.